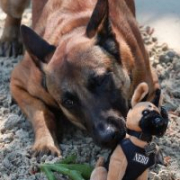 State Senator Jason Lewis recently joined a unanimous vote in the Massachusetts State Senate for An Act allowing humane transportation of K9 partners, also known as Nero’s Law, ensuring law enforcement officers’ K-9 partners can receive life-saving medical attention and transport if injured in the line of duty. The bill comes in response to the tragic events in 2018 that took the life of Yarmouth Police K-9 Sergeant Sean Gannon and severely injured his K-9 partner, Nero.

In April 2018, Sergeant Gannon was shot and killed while serving a warrant in the Town of Barnstable. Despite the multiple empty ambulances on site, Nero had to be rushed to the animal hospital in the back of a police cruiser. Current Massachusetts law prohibits emergency medical personnel from treating and transporting animals. Fortunately, Nero survived his injuries, but the inability to transport him showed that reform is needed to better care for police working dogs who risk their lives every day to serve the Commonwealth.

This legislation now advances to the Massachusetts House of Representatives for consideration.