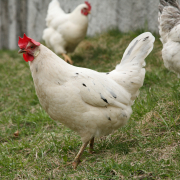 (BOSTON – 12/22/2021) Following action by House and Senate lawmakers earlier this week, a bill to ensure a more secure egg supply chain in the state, was signed into law Wednesday. The legislation updates Massachusetts’ farm animal welfare standards passed by voters in 2016 to align with other states.

“When Massachusetts voters overwhelmingly passed a ballot question guaranteeing animal welfare in 2016, our state had the strongest protections for farm animals in U.S. history,” said Senate President Karen E. Spilka (D-Ashland). “Since then, national and industry standards have shifted towards even stronger animal welfare and consumer safety protections. With this law, Massachusetts is taking action to prevent cruelty to farm animals and ensure that our state has continued access to eggs that meet the expectations of the Commonwealth’s residents. I want to thank House Speaker Mariano, for his collaboration, Senator Lewis for his steadfast focus on this issue, his fellow conferees and their staffs, and the residents of Massachusetts, including animal welfare advocates and egg-producers, for their support for this legislation.”

“In 2016, the advocacy of animal welfare groups across the Commonwealth and overwhelming support from voters passed Ballot Question 3 to ensure that the factory farming industry provides more humane standards for pigs, calves and egg-laying hens, representing a historic victory for animal welfare,” said Senator Jason Lewis (D-Winchester), the lead sponsor of the Senate bill. “Since then, the standard around the country for egg-laying hens has evolved, and Massachusetts is now an outlier, which could threaten our supply of eggs. Fortunately, the egg producers and animal welfare groups have come together to agree on this legislation, ensuring safe and humane conditions for egg-laying hens and affordable eggs for Massachusetts consumers. I appreciate the leadership of the Senate President and the support and guidance of my fellow conferees, Senator Rausch and Senator Tarr, in getting this bill passed.”

“Senator Lewis has been leading the way for farmed animals since he joined the Massachusetts legislature, culminating today in passage of a bill that will improve the lives of millions of egg-laying hens each year,” said Laura Hagen, Massachusetts state director for the Humane Society of the United States. “The mandate of cage-free conditions with critical environmental enrichments for chickens, including areas for them to dust bathe, perch, scratch and lay eggs in nest boxes, marks a critical upgrade in the welfare and treatment of these birds.”
An Act to upgrade hen welfare and establish uniform cage-free standards updates a 2016 law passed by the voters of Massachusetts. It would align Massachusetts’ standards to that of other states by:
• Providing detailed cage-free standards that consist of one square foot of usable floor space per hen in multi-tiered aviaries, partially-slatted cage-free housing systems or any other cage-free housing system that provides hens with unfettered access to vertical space so that hens can engage in vital natural behaviors such as perching, scratching, dust bathing and laying eggs in a nest.
• Ensuring protections for various types of egg products. As passed in 2016, the law applied to shell eggs, but not egg products. This legislation would also cover egg products, mirroring legislation passed in other states.
An Act to upgrade hen welfare and establish uniform cage-free standards is endorsed by New England Brown Egg Council, The Country Hen (a major egg producer in the Commonwealth), United Egg Producers, and the Massachusetts Food Association, which notes that the language in this legislation offers a “readily available solution” to ensure retail-endorsed cage-free standards. The bill also has the support of numerous animal protection organizations, including the Massachusetts Society for the Prevention of Cruelty to Animals, Farm Sanctuary, the Humane Society of the United States, Animal Rescue League of Boston, Animal Equality, Animal Outlook, The Humane League, Harvard Law School Animal Law & Policy Program, Mercy for Animals, Compassion in World Farming, and World Animal Protection—all groups that have been working to increase welfare for farm animals for decades.

Text of An Act to upgrade hen welfare and establish uniform cage-free standards can be found at malegislature.gov.