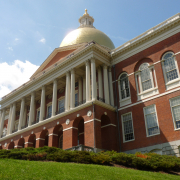 The Grand Bargain law was negotiated by State Senator Jason Lewis and State Representative Paul Brodeur (now the Mayor of Melrose) who served as the co-Chairs of the legislature’s Labor and Workforce Development committee. They worked closely with stakeholders representing labor and the business community in the Commonwealth to negotiate and pass this important legislation.

“I’m proud to have helped lead the effort along with Representative Brodeur to pass legislation in 2018 that continues to improve the lives of hundreds of thousands of Bay State residents,” said Senator Jason Lewis. “Increasing the minimum wage to $15 per hour is helping us tackle income inequality in Massachusetts, and make our economy stronger and more fair and just.”

“The Grand Bargain is an excellent example of individuals working together for the betterment of the people,” said Mayor Paul Brodeur. “Democrats and Republicans, House and Senate members, and the business and labor community came together and forged a workable compromise on a set of complex issues. The final bill received bipartisan support in the legislature and was signed into law by Governor Baker. The wage increase will occur amidst a surge of inflation, helping one million workers in the Commonwealth and their families meet their basic needs.”

Increases in the minimum wage have been shown to stimulate consumer spending, improve worker productivity, and reduce employee turnover.