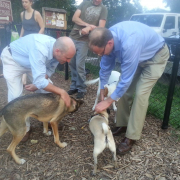 State Senator Jason Lewis joined his colleagues in the Massachusetts State Senate to pass several bills that promote and advance animal welfare in the Commonwealth. Senator Lewis has long been a champion for preventing animal cruelty, including the successful passage of protections for farm animals against cruel confinement systems.

The first bill passed by the Senate is S.2992 An Act protecting research animals, commonly known as the Beagle Bill, which encourages research facilities that use dogs and cats to offer these animals up for adoption after finishing research, rather than automatically euthanizing them. According to the U.S. Department of Agriculture, nationally more than 60,000 dogs, almost all beagles, and nearly 20,000 cats are used each year to advance scientific research and to test cosmetics, pharmaceuticals, and other household products. Currently, many research labs choose to automatically euthanize these cats and dogs once their experiments are over. This legislation facilitates a relationship between animal research laboratories and registered non-profit animal rescue organizations and requires that when these animals are no longer needed, the research facilities make every effort to place animals up for public adoption.

“As an animal welfare advocate and pet owner, I was very pleased to support the passage in the Senate of these two important bills,” said Senator Jason Lewis. “They will build on progress already made to ensure the humane treatment, health, and safety of animals in Massachusetts.”

An Act protecting research animals has passed both branches of the legislature and been signed into law by Governor Baker. An Act protecting the health and safety of puppies and kittens in cities and towns is now pending in the House of Representatives for further consideration.