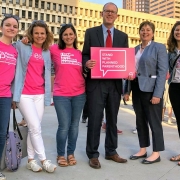 “In the wake of the shocking Supreme Court decision overturning Roe v Wade, it is imperative for the Commonwealth to ensure that abortion providers are fully protected and patients, whether from Massachusetts or other states, have access to the healthcare services they need,” said Senator Jason Lewis. “I was proud to join with my House and Senate colleagues in passing this critical legislation to further protect and expand access to reproductive and gender-affirming healthcare in Massachusetts. I’m especially pleased that the final bill includes an amendment I filed during the Senate debate to expand access to medication abortion services on our public college and university campuses to help students overcome the significant barriers to care that many face today.”

This legislation provides legal protections to out-of-state patients, abortion care providers, pharmacists, mental health professionals, insurers and other people involved with the delivery of reproductive health services. It prohibits law enforcement officials from cooperating with out-of-state or federal law enforcement agencies investigating abortion care that is legal in Massachusetts. Healthcare providers and patients will also have the option to countersue over abusive litigation.

Other provisions in the bill include:

An Act expanding protections for reproductive and gender-affirming care received final passage by the Massachusetts House and Senate and was signed into law by Governor Baker on July 29, 2022.