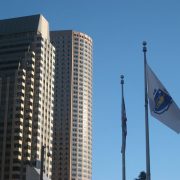 On January 6, 2021, the Massachusetts State Senate and House of Representatives enacted legislation sponsored by Senator Jason Lewis that establishes a special commission to study and redesign the Massachusetts state seal and motto in an effort to make it more inclusive and historically representational. The measure was signed into law by Governor Charlie Baker on January 11, 2021.

“Our collective symbols of identity matter, and if they marginalize some of our fellow residents and perpetuate harmful stereotypes, they should be replaced,” said Senator Jason Lewis, the lead sponsor of the legislation. “I want to thank former Representative Byron Rushing, former Executive Director of the Massachusetts Commission on Indian Affairs John ‘Slow Turtle’ Peters, and many other Native leaders and allies for championing this legislation for many years.”

The current state seal, adopted in 1898, prominently features a Native American figure. Historical records show that figure is a composite based on a portrait of a Native American chief from the Chippewa tribe —which is primarily located in Montana and the Dakotas, not Massachusetts. Above his head is an arm holding a colonial-era broadsword believed to be the sword of Myles Standish, a Plymouth Colony military commander known in part for killing Native Americans. The Native American holds a downward pointed arrow that has been interpreted as signifying the pacification of the native population.

Indigenous activists and others have long viewed this seal and the state flag (which contains the seal) as racist, and have advocated for its change for many years. The original version of this bill was first filed in 1985 by former State Representative Byron Rushing, a prominent Boston civil rights leader.

“We are so happy that the Massachusetts Legislature has finally taken a first step toward repairing the harm done to Indigenous people,” said Mahtowin Munro from United American Indians of New England (UAINE). “We look forward to working with them further to enact other important legislation in the new legislative session that addresses Native American issues.”

“The Network for Social Justice is so excited to see this groundbreaking legislation realized 35 years after it was first introduced by former Rep. Byron Rushing. We are honored to have played a small role in this legislative process spearheaded by Senator Lewis and Senator Comerford, in collaboration with the long running advocacy of Mass Peace Action and the work of the MA Indigenous Legislative Agenda coalition,” said Liora Norwich, Executive Director of the Winchester-based Network for Social Justice. “We hope that the passing of this bill will serve as a platform from which we can collectively tackle other symbolic and structural forms of White Supremacy Culture throughout Massachusetts.”

The members of the special commission will include:

Resources for Residents During the COVID-19 Emergency
Scroll to top