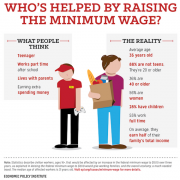 If somebody works full-time, they shouldn’t live in poverty.  They should, at the very least, be able to provide for the essentials for themselves and their families: a roof over head, enough food in the fridge, health insurance, and the ability to save for the future.  This is a value that the vast majority of us share, which is why it is so important that Massachusetts raises its minimum wage this year.

The image of the typical minimum wage employee being a teenager working a part-time job in retail or food service to earn pocket money is an inaccurate depiction of the average minimum wage earner.  Their average age is 35 years old, with nine out of ten being 20 or older, and over one-third being 40 or older.  More than half are women, and three in ten have children.  Notably, more than half work full time.

That’s why I’m proud to have supported the Senate’s minimum wage bill that restores the value of the minimum wage in Massachusetts by increasing the minimum wage to $11 by 2016 and ties future increases to the Consumer Price Index (CPI) for the Northeast region.

This not only directly benefits these workers and their families, but it also benefits our local economies.  The more money that minimum wage workers are able to bring home, the more they will have to spend in our communities’ small businesses.  Additionally, numerous studies have evidenced that raising the minimum wage does not harm employment.

Currently, the legislative effort to increase the minimum wage is awaiting a conference committee to reconcile differences between the Senate’s version and the House’s version of the bill.  In case the legislative effort stalls on Beacon Hill, we have the back-up of a ballot initiative that will appear before voters this November calling for a minimum wage increase.  Activists from the Raise Up Massachusetts coalition gathered hundreds of thousands of signatures of voters across the Commonwealth to accomplish this goal, demonstrating both the passion behind this movement as well as the broad, grassroots support for a minimum wage increase specifically and stronger economic justice policies more broadly.

Economic justice is severely lacking when the typical, minimum-wage Wal-Mart employee has to work forty hours a week from January through the end of August just to make what the CEO of Wal-Mart makes in a single hour.  Increasing the minimum wage to simply restore its value achieves both the moral imperative of lifting many hard-working Massachusetts families out of poverty and the economic imperative of stimulating our local economies.

Author’s Note: This is the first of a two-part series focusing on economic justice policies pertaining to legislation that is currently before the Massachusetts Legislature and that will appear before voters on the November ballot.