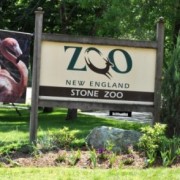 At a recent meeting, while discussing the topic of strengthening municipal economies, Massachusetts’ Secretary of Housing and Economic Development Jay Ash noted that communities “need to figure out their asset.”  In other words, what qualities, resources, or institutions does a community or region have that make it unique and attractive to families, businesses, tourists, and other populations?

For the Metro North region, one of our most unique and important “assets” is the 110-year-old Stone Zoo, located just on the Stoneham side of the Melrose-Stoneham line.  The zoo is an important cultural, educational, and economic institution that brings visitors to Metro North, provides jobs and income opportunities ranging from animal care to construction, and delights children and adults alike.  Originally under the control of the Metropolitan District Commission, custody of the zoo shifted in 1991 to the Commonwealth Zoological Corporation, renamed in 1997 as Zoo New England.

As Zoo New England’s website points out, the zoo’s “programming is made possible through earned revenues and state, private, and corporate funding.”  As such, the Stone Zoo is one of our Commonwealth’s best examples of a public-private partnership, a collaborative model for which we should strive when appropriate – particularly with sizable cultural institutions.

Zoo New England has strengthened its private fundraising in recent years, and attendance has increased by a reported 20% since 2010.  Further, our region’s state legislative delegation has strenuously advocated for increased financial support from the state, as well as greater support from the Governor’s office, including releasing additional bond funding authorized back in 2008.

However, the Stone Zoo still faces challenges that have put renewal of its accreditation with the Association of Zoos and Aquariums at risk.  Zoo New England has cited deferred maintenance and aging infrastructure as key issues that need to be addressed.

In the meantime, the region has responded to the risk of a loss of accreditation with inspiring grassroots support.  While the zoo currently faces a capital funding shortfall, the solution is close at hand – the Legislature has formally authorized the Governor to issue capital bond spending to support Zoo New England, which manages the Franklin Park and Stone Zoos.  Recently, more than one thousand area residents signed a petition to Governor Charles Baker and Secretary Ash urging them to release the already-authorized bond funding.

The Stone Zoo is an important asset to our communities in Metro North and to the economy of the region.  Zoo New England leadership has worked hard to develop and execute a plan to secure renewal of accreditation and make progress on deferred maintenance, while collaborating with community leaders and communicating with the public.  The legislative delegation stands ready to work with the administration to address any concerns and to get this critical funding released; the zoo stands ready to keep the regional economy humming; and, all across the region, children are jumping at the chance to enjoy learning about the animals at our regional asset, the Stone Zoo.