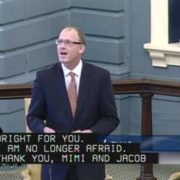 The Massachusetts Senate solidified its role as a civil rights leader in passing An Act Relative to Transgender Anti-Discrimination. This bill provides equal access to public places for every resident of the Commonwealth, regardless of gender identity.  Public accommodations include but are not limited to: retail stores and malls, restaurants, hotels, medical offices and nursing homes, grocery stores, theatres, public transportation, and sports arenas.

Senator Jason Lewis was proud to support the legislation.  His floor remarks, as prepared for delivery, are featured below.  “Massachusetts has long stood at the forefront of civil rights, from abolishing slavery to women’s suffrage to marriage equality,” said Senator Jason Lewis.  “I’m proud that the Massachusetts Senate reaffirmed its commitment to protecting every person’s civil rights and equal protection under the law by passing this vitally important legislation.”

According to a 2014 Fenway Health survey, 65 percent of transgender Massachusetts residents reported experiencing discrimination in public spaces including restaurants, retail establishments, and health service centers.  This legislation prevents such discrimination against transgender individuals in public accommodations by adding the phrase “gender identity” to pre-existing law.

This bill builds on the Transgender Equal Rights Bill, passed in 2011, which prohibited discrimination on the basis of gender identity in housing, education, employment, and credit.  Where the final bill in 2011 did not include public accommodations protections, this legislation completes a near decade of advocacy around full inclusion of transgender residents in communities across the Commonwealth.

The bill has received exceptional support from businesses, professional sports teams, faith leaders, labor unions, and law enforcement across the state.  Over the course of the past year, more than 200 businesses across the Commonwealth and members of all five New England sports teams came out in support of this bill as central to promoting equal access rights for everyone in Massachusetts.

The bill passed in its original form with a 33-4 vote, with rejection of all but one amendment. The adopted amendment is an “emergency preamble,” which means that the legislation would take effect as soon as it is signed in to law.

More than 200 cities and towns across the country, including 14 in Massachusetts, already have these protections in place.  If implemented at the state level, Massachusetts would become the 18th state in the country to offer public accommodations protections to their transgender residents.

The bill now goes to the House of Representatives for consideration.

Dr. Martin Luther King, Jr. said, “The arc of the moral universe is long, but it bends toward justice.”  He also reminded us that this doesn’t happen on its own or by accident.  It takes concerted effort.  It takes courage and determination and resilience.

Today, the Massachusetts Senate is taking such action.  In 2011, the Legislature passed An Act Relative to Gender Identity, which provided legal protections for our transgender citizens in the areas of employment, housing, credit, and public education. But this legislation, while an important step forward, did not include protections in public accommodations.  Today, we are taking action to ensure that no transgender person in the Commonwealth of Massachusetts is discriminated against under any circumstances.  We are also making an important statement that every person deserves to be treated with respect and dignity.

Nobody has done more in this instance to bend the arc of the moral universe toward justice than transgender individuals themselves and their families.  I want to recognize one particular family who is here with us today, and who I’m so proud to call my constituents: the Lemay family — Mimi, Joe, Lucia, Ella, and Jacob.  I had tears in my eyes when I first read Mimi’s “Letter to my son Jacob on his 5th birthday” which was published by the Boston Globe.  I would like to read a brief passage from her letter:

“Jacob, my love, it is you that have transitioned us to a life less ordinary, and so much more meaningful than it ever would have been.  Thank you deeply for your sacred trust.  The mystery that is you may never be amenable to a full resolution.  I don’t know what’s beyond the next bend in the road, but I am no longer afraid.  I believe in the goodness of people.  And I believe in your ability to dispel much of the ignorance and intolerance in those you may encounter.  I look at how fine a human being you are becoming – far beyond my meager original intentions – and I know that the future is bright for you. I am no longer afraid.”

Thank you, Mimi and Joe and Jacob, and everybody who has worked tirelessly and courageously to advance the cause of justice.