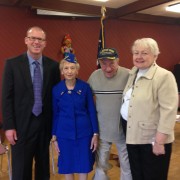 The Massachusetts Senate unanimously passed the BRAVE Act, new legislation that will expand benefits and increase access to a range of services for veterans, active-duty military, and their families. Understanding the sacrifice that military personnel and their families make not only while on active duty, but also after returning home, the Massachusetts Legislature has consistently provided a continuum of major veteran legislation to help with those who sacrifice the most for our freedoms.

“Massachusetts has a strong record of supporting veterans, service members, and their families, and this legislation will ensure that the Commonwealth continues to lead the nation on this front,” said Senator Jason Lewis. “Many of the initiatives advanced in this bill come directly from recommendations offered by veterans themselves. The Senate is proud to meet its commitment to supporting those who have put the most on the line to defend our freedoms.”

On the recognition front, the legislation designates the 5th day of April as Gold Star Wives Day and the last Sunday in September as Gold Star Mothers and Families Day, and directs cities and towns to designate reserved parking for veterans at all city and town halls.

The bill also grants paid military leave for those called to duty by the armed forces for up to 40 days for training and operation purposes. To help ease the costs of housing, the legislation changes the requirement for veterans to receive property tax exemptions from residing in the Commonwealth for five years down to two years. It also increases the amount a veteran can earn on their property tax exemption for volunteering in their city or town.

The BRAVE Act increases the burial expense paid by the Commonwealth from $2,000 to $4,000 for indigent veterans to receive to adequately provide for a dignified funeral. It also exempts any veterans who receive annuities for service to their country from income calculations when applying for state programs or services.

The BRAVE Act now goes to the House of Representatives for consideration.