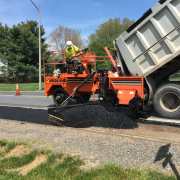 (BOSTON) Earlier this month State Senator Jason Lewis joined his Senate colleagues to unanimously pass a bill that would approve the authorization of $350 million towards transportation needs in the Commonwealth, including $200 million for the Chapter 90 program, which provides cities and towns with funding for local transportation-related projects, including road and bridge repairs.

“This bill provides critical funding for our local communities to repair and improve roads, bridges, sidewalks and other transportation infrastructure,” said Senator Jason Lewis. “I’m particularly pleased that we were able to increase funding for the Complete Streets grant program that makes roads and intersections safer for all users, especially pedestrians and cyclists.”

The Complete Streets grant program, which Senator Lewis helped to create when he previously served as a State Representative, enables improvements to roads, sidewalks and intersections that improve access and safety for pedestrians, cyclists, buses, and motorists.

Having previously passed in the House of Representatives, the bill is expected to be signed into law by Governor Baker in the near future.